Awesome! Pulled Pork: With A Smoker or Without

It’s a summer holiday weekend and in Alabama and that means barbeque.  And by barbeque, we mean pulled pork.   We spice it up with ribs and maybe some chicken, but pulled pork is where it’s at.

The great thing about pulled pork is that it is inexpensive, reheats beautifully, feeds a crowd and pretty much everyone loves it.  Oh, and it’s gluten free if you use a gluten free barbeque sauce (which many are) and paleo in its natural state.  So Brooke can eat it with her salad and stay on her diet.

When I was growing up at the lake with my family, my grandmother always made ice cream.

There are fancy cooked creams and  whipped things in many ice cream recipes, but my absolute favorite was a light and almost fizzy ice cream that my Nanny made with store brand strawberry soda and condensed milk.

This recipe uses that same technique (which is dead easy) and a made in Alabama favorite, Grapico.   The little girls will adore the lilac color and the flavor is light and fun.

The Best Talks from Tedx Birmingham 2016

Tedx Birmingham’s theme in 2016 was Pure Imagination.  But the best talks had more to do with the truths in life.  From living through tragedy to living through college, each of these talked about living life on life’s terms.

The great news is that the talks are all posted on the internet for to view and to share.  Here are some of our favorites from this year:

Why I Decided To Stop Saying “This Happened For A Reason”

Amy Bickers’ ex-husband killed himself in front of her in 2009.  She talks about the redemptive story arc of tragedy.   Her talk is here.    A good follow up would be to read Victor Frankl’s “Man’s Search for Meaning”.  Share this talk with your friends that have slogged through tough things in life.  This is the talk that will stick with you for a long time.

Why Focusing Too Much on Goals Is Bad

Garrison Linn is a researcher in UAB’s Quantum Materials Lab.  He talks about why being goal driven is not necessarily the end all and be all to actually reaching your goals.  Watch him talk about setting goals here.

Step Outside of Your Comfort Zone

Randi Pink is a writer and graduate student of creative writing at UAB who recently published a young adult novel about being black in a mostly white high school. Her novel is informed by her personal experience in a similar situation.

What makes Randi’s Ted talk so fun is her charming delivery.  Click here to see her speak about going from a basically all white community to an almost all black community while getting the audience to sing.

To see more of the speakers at Tedx Birmingham,  go to www.tedxbirmingham.com  The talks from 2016 and past years are available there.

What's It Like To Be On An HGTV Show? Find Out from a Local!

Hi!  Tell us a little bit about yourself?

I’m Amy Clark and I am a real estate agent for Lake Martin. I work with clients from Birmingham and Alabama and the US to find lake homes.

What show did you work on?

How did you get involved with the show?

Last November I was at the Alabama  Association of Realtors of conference, sitting outside, when I  got a phone call from a producer at HGTV. At first, I didn’t think it was real.  They told me they were calling from HGTV and wanted me to be on one of the episodes.  Over the course of the next month, I went through the interview process.  We had Skype interviews and phone interview. It was a long process, but was so worth it.

Why did HGTV call you?

HGTV wanted to focus on Lake Martin and a particular price point and a young family. They heard about me.  I involved a young couple that they had sold a house to the year before from Auburn with 2 young children, Holly and John Parker.

So, the Parkers had already purchased a lake home?

Yes – they purchased a lake home through me a year ago.  So they used the home they purchased as the final choice. I picked 3 additional homes that were currently on the market to be the other options. This is how they do those home purchase shows due to the time constraints for filming.  The Parker’s had not seen those homes before so their reactions to the homes were genuine. One of the reasons I wanted to work with Holly and John on the HGTV show is because they were very vocal and verbal, I knew they would be very honest. Holly and her husband John (Parker) are so real. Their little girl, who is an adorable red head,  and their little boy did the best of all. 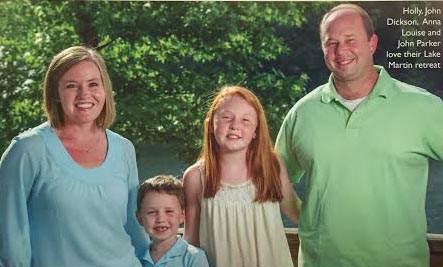 How long did it take to shoot the program?

Four solid days of filming in the freezing cold in November.  It was 28 degrees. Started at 6am and finished at 6pm.

It’s unbelievable what it took to do it. A team of 12 men came down from New York, one was lighting, one was sound, several camera men, a coordinator and one who was the runner.  What was so funny is that we got so close and we have stayed in touch for several months afterwards.   And of course, I am very close to my Auburn couple.

By day 3 you are so tired and there are so many takes.  That one little clip may have taken 10 or 12 takes and it was so hard to remember what in the world I said! There was one person on staff that their job was to help me to remember what I said so I could repeat it if there was another take!

We were at the silo at Wind State Park and we were shaking so violently it was so cold.  You couldn’t tell on the TV show, they made it look like it was warm.  They would wrap us in warm blankets. And as soon as the director said “Action” they snatched the blankets off.

After the crew left, a few weeks later, a two man aerial team came with a drone. One man handled the camera and another man handle the drone. The drone was massive and it did photographs of all the houses in the show. These guys were top notch professionals.

What was the most challenging part of the process?

The most challenging thing had to be that the producers compressed those 4 days into 22 minutes for the show. I don’t know how they did that. It was a huge job.

How has the show impacted your business?

I was so excited about the exposure that Lake Martin got. You would not believe how many phone calls, listings and buyers I have had because of that TV show. Calls from all over the country!

What is the farthest away?

Probably California and they did buy a lake house.  Some from the Northeast.

If you had to do it over, would you do the show again?

It was such a great experience and I would do it again!

For more information about Amy Clark, go to www.sellinglakemartin.com

If you want to read more about additional Alabama homes that have been featured on Lakefront Bargain Hunt, click here.

Try something new! The Pinhoti trail is only an hour from Birmingham. https://t.co/FB1N3PrMob

Give Life to Your Story: Your Teenager Craves Your Attention

Lake Living: Reasons to Nurture You...

Give Life to Your Story: Your Teena...